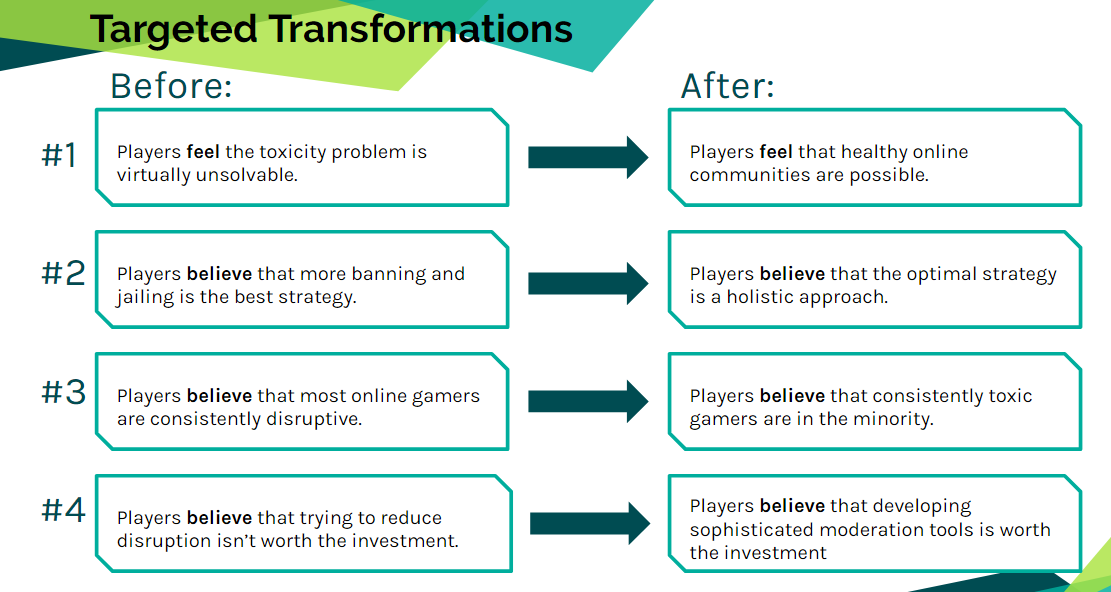 We wanted to revisit our transformation this week based on some advice from our faculty. There was a general impression that the transformations were general, underdeveloped, and under-explored. Given that, we did another iteration pass to really tease out the different possible transformations and keep in mind how they may intersect with potential audiences.

One particularly notable shift in our thinking was changing a Knowledge transformation to a Disposition transformation. Wanting to show people that online toxicity is a solvable problem (to a degree) is one thing, but wanting them to believe it afterward is something else entirely. The misconception that online games are inherently toxic may also be more general and therefore applicable to our audience as well.

We made sure to elaborate on the barriers for each of these transformations as well. We included the type of barrier, elaborated on it with some detail, and noted down how we think we should approach the issue.

Speaking of our audience, we were also given some advice as to how to think about that. To get a better idea of who might show up to this thing, we have worked out a breakdown of the types of attendees we expect.

While this isn’t yet perfect, it is a helpful tool for thinking about the audience’s makeup. As you can see, while we expect around 15 of 60 audience members to be coming direclty from the gaming industry, most of the others may not be nearly as literate in gaming culture or norms. That’s something we will need to be aware of.

As for how many of them play games in their free time, this is what we expect. These numbers are based on the Entertainment Software Association’s 2019 Essential Facts About the Computer and Video Game Industry. We shifted them up slightly as we expect people who are attending the Games for Change Festival to be more likely to be into games than the average person. These numbers are promising – we expect over half of our audience to be gamers in some capacity, with the majority of those being occasional online gamers. This gives us a generous third of the audience who have likely experience some sort of disruption in the past. Even amongst the quarters of our audience who aren’t online gamers or gamers whatsoever, the hobby is common enough that we believe they will most likely know somebody who is. This makes the argument for relevance somewhat easier.

We plan to show these figures to Raul at Games for Change next week to get his take on their accuracy.

We created a digital rendition of last week’s paper prototype.

Our goal was to build the foundational system of a pretend community milling around, playing together, and affecting each other’s social norms. For interaction, we have a basic Drag’n’Drop mechanic to moderate the community. The zones that the player can put their community members are EDUCATION, BAN, and JAIL.

Just like the paper prototype, our goal is to build in a dominant strategy of education. Ideally, our playtesters will come in thinking that they should ban or jail community members predominantly, but discover over time that education is a better long-term solution. This will require some playtesting next week to iron out.