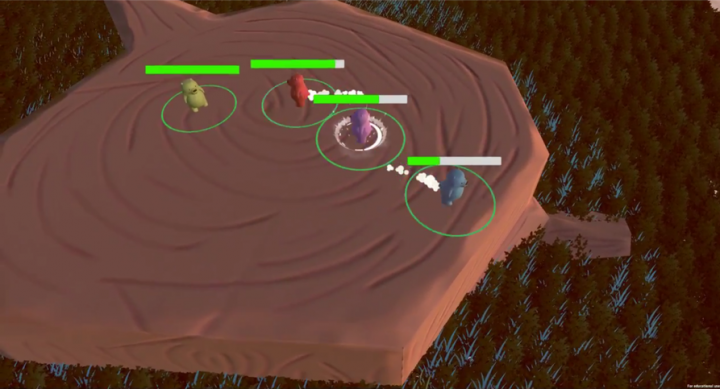 Prompt: Can we make a multiplayer game where a player’s rhythmic action directly affects other players?

Gang Beats is a 2-4 player fighting game where players hit each other on the beat in order to be the last one standing.

Be the last player standing!

Use the action button to punch players who are within your circle.
Damage other players by punching them on the special beats. A special beat sounds like a clap. Being as on-beat as possible increases your damage!

Punching on the special beats when no one is inside your circle, causes your circle to grow in size. Use this to your advantage!

However, if you punch off-beat, your circle shrinks. Don’t be off-beat!

You can also press the Dash button to dash on any beat.

Players attack each other through punching. This is done by simply pressing the “A” button on the Xbox One controller. Punches aren’t directional, so all players within a limited area around the punching player are affected.

Depending on how close players punch to the beat, the ring around them will change colors. Green signifies that the player was very close to hitting on the beat, while yellow shows that they were somewhat close. The accuracy of the hit on the beat will determine whether the ring turns green or yellow. If the timing of the hit is offbeat, the ring will turn red.

Players may notice that the ring around their character changes size over time. This ring shows a player’s area of effect – any other player in that ring when an attack action is performed will be affected. When a player gets either a yellow- or red-colored ring (meaning their accuracy was low), the ring’s size will decrease. However, players can increase the size of their ring by performing the punch action to the beat of the music away from other players.

During gameplay, players’ accuracy to the beat will affect how they attack other players. If an opponent is inside the player’s ring, the player can attack them. If both players attack each other at the same time, their accuracy will determine what happens next. If the players have the same ring color (both yellow or green), the players push each other back. If the rings are different, the player with better accuracy will damage and push back the less accurate player.