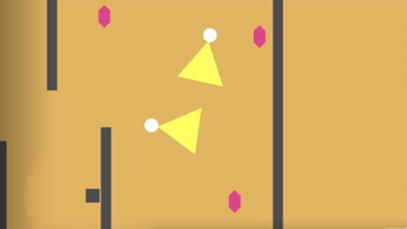 Prompt: How can we create a rhythm game in which rhythm is not the main objective?

In this game, players must sneak through a building and collect treasure, all while hiding from both security cameras and guards. The cameras turn on with the beat, giving players a chance to react accordingly.

While sneaking through the level, players will hear an audio cue that alerts them that the cameras will soon turn on. At this point, players must press and hold ‘Enter’ as well as remain still. If the player is moving or isn’t holding ‘Enter’.

As players explore the space, they come across several pink jewels. The player’s goal is to pick up as many of these as possible without being caught or seen.