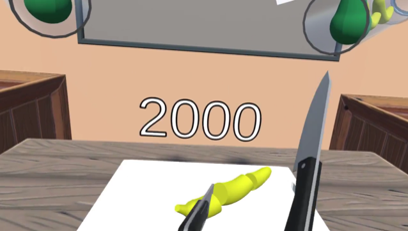 Prompt: How can we innovate on the presentation of a note highway in VR?

In this game, players are placed in a VR kitchen where they must chop and push ingredients that arrive to the beat of music.

Ingredients will fall to the chopping board to the beat of the music. Using a chopping movement, chop each ingredient an appropriate amount of times, then push the chopped ingredients into bins by holding down the trigger and swiping the ingredient.

Move the controller in an up-and-down chopping motion to chop the ingredients. The knife must fully leave an ingredient before it can be chopped again. Chopping may only be done while the Oculus Touch’s trigger is not pressed (indicated by a silver, normal-looking knife).

Players must hold the Oculus Touch trigger down to turn the knife red. Once it is red, the knife can no longer chop; it can only be used to push ingredients. Players must swipe the ingredients to the left or right so they land in the bins to score points.

Different ingredients require a different number of chops. Avocados (green) require one chop, bananas (yellow) require two, and mushrooms (red) require three. All ingredients must be pushed into bins after being chopped the correct number of times.