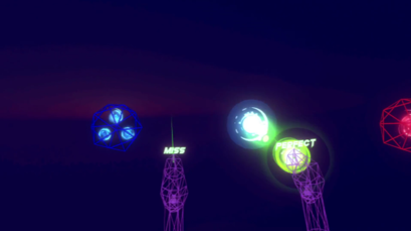 Prompt: How can we create a game focused on testing players’ internal sense of rhythm?

In this game, players are tasked with shooting targets that appear in the wireframe-styled world around them. Players must charge their shots to destroy targets; however, doing so removes the music from the world. Since shots must be charged for a certain number of beats, and targets require different numbers of beats to be destroyed, players must internalize the beat in order to succeed.

Aim and shoot at colored targets by holding down the trigger and releasing it after a certain number of beats.

To successfully shoot blue targets, hold down the trigger for three beats before releasing.

To successfully shoot red targets, hold down the trigger for one beat before releasing.

Players must hold down the trigger for a certain number of beats in order to shoot. This “charges” up a shot, allowing it to destroy a target.

As players hold down the trigger to charge shots, the music fades. This forces players to internalize the beat of the music and act accordingly. Players’ shots are not snapped to beats, so as long as a player can keep a steady beat, they’re not required to attempt to act on the music’s beats.