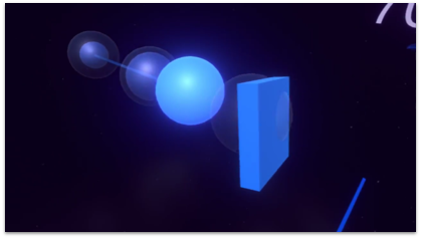 Prompt: How can we innovate on full-body motion experiences in VR?

In this game, players must push ball-shaped cues that appear in front of them with a corresponding hand, tracing a line through spherical targets with their movements. The cues appear and disappear with the music. When players are in the flow of the game, it should look like they’re dancing.

Push the colored balls along the path that appears, using the hand of the corresponding color. To get the highest score, touch each spherical target with the ball when it is completely filled with color.