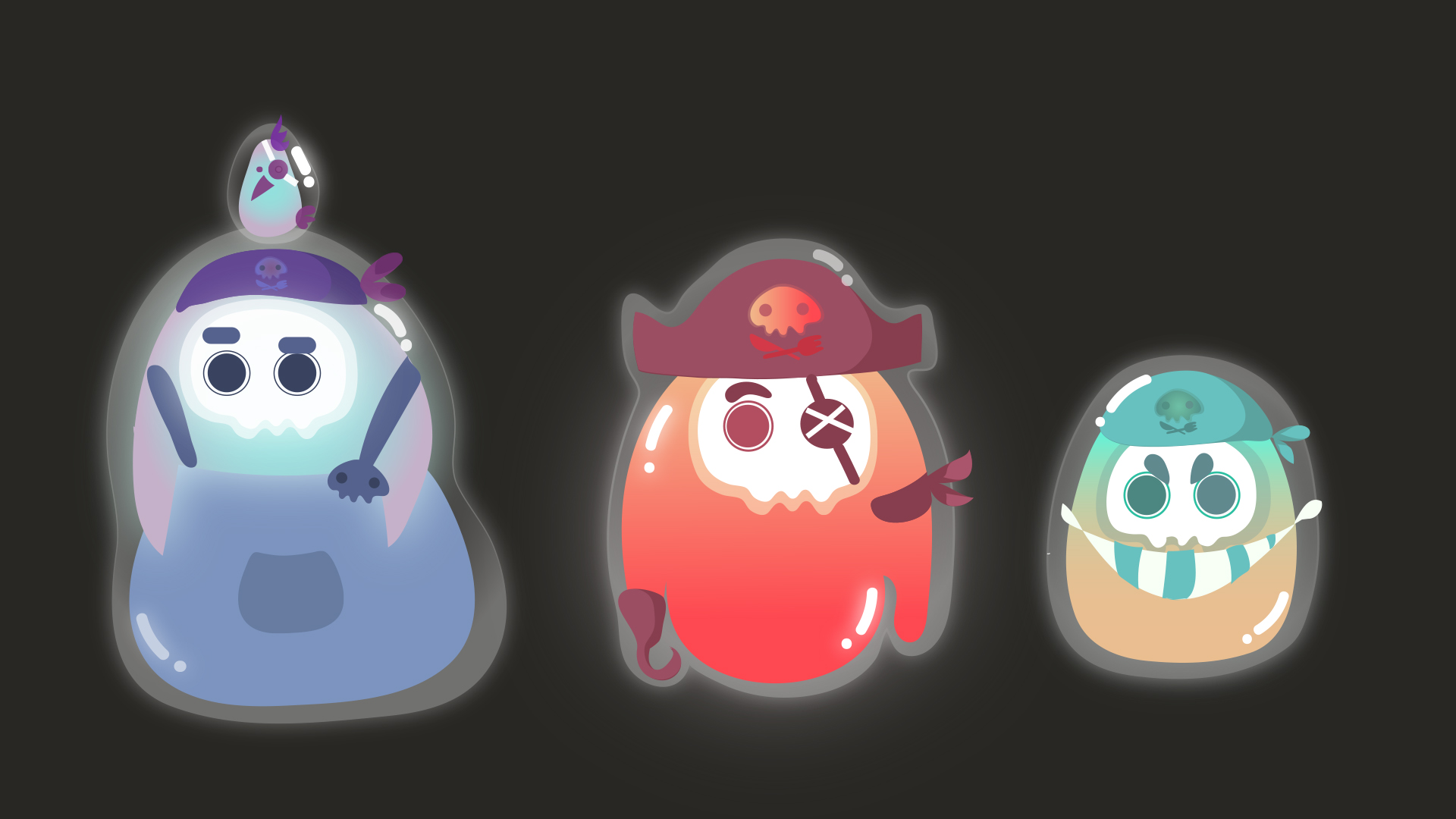 So far we have been working to design the roles of captain, navigator of the ship, and crew, players who man the cannons of the ship. We have iterated on mechanics that allow the captain to move the ship up and down, as well as crew mates to move their cannons around the ship in order to aim. We are anticipating our second playtest and wish to lock down these two roles in order to consider a third role to provide more variety and selection for the players.

Our designers came up with a third interaction scheme for the game based on feedback we received from clients and faculty. The captain can move the ship up and down onscreen, as well as rotate a barrier that can protect parts of the ship from enemy impacts. The gunners are able to rotate the cannons around the ship’s entire 360-degree range (though they cannot occupy the same space/overlap). We wanted to try a version with these mechanics in order to give the shooters more independence from the navigator, as well as to give the navigator a more clear and meaningful interaction.

Now that we have determined our product idea, we have been creating original music for the experience. Our sound designer has created background music with different moods to suit the different sections of our game. Have a listen below.

This is our fourth design idea. We designed and built it in tandem with Dynamic Defenders as an alternative interpretation of the original allo idea: all players control part of one object. In this game, players each man one of three cannons and try to protect their ship from incoming enemies. They can also collect power-ups that change the nature of the shots their cannons produce. For this prototype, players must try to survive for as long as possible before their health bar reaches 0. The idea of this design was to encourage player cooperation by binding them to one in-game object and tasking them with protecting the object (and themselves by extension). Faculty and client response was positive, particularly with regard to its potential for expansion. They found the controller, a rough implementation of the Dynamic Defenders controller, unintuitive and they felt that having the spaceship rotate automatically was more of a hindrance than a help. Based on our client feedback we decided to move forward with this premise, and create a design for a full game around it.

This is our third design idea. Since faculty responded positively to being able to freely bounce around, we decided to change the design to resurrect our initial goal of a cooperative experience while maintaining the player agency they liked. In this game, players must work together to protect a constantly-changing VIP player from hazards coming at them from offscreen. If a VIP is hit, they lose their status and the title shifts to another player. Players must try to survive for as long as possible; once all players have been hit as VIP, the game is over.

This prototype was designed in response to positive feedback from our previous Bouncing Billiards prototype. We wanted to test a mechanic of giving players full agency in determining what they do, while incorporating game mechanics that require them to work together and help each other. Responses were positive, with the biggest issues being the learning difficulty and the incomplete quick-time interaction events. We ultimately discarded this idea in favor of our fourth prototype because we could not justify how the game could be expanded into a more comprehensive final product that required 14 people to make.

This is our second design idea. Using the basic mechanics of pool and applying our multi-player bouncing jellies, 2-4 players engage in a chaotic race to get the most balls into the pockets. After pocketing all of the regular balls, The Crazy Eight ball will appear and begin chasing the nearest player. All of the players must work together to pocket The Crazy Eight; however, they can only hit it safely from behind, lest they be consumed. If the players successfully pocket The Crazy Eight, the players who remain alive get bonus points. If they all get eaten, then the winner is determined by his/her score from pocketing the normal balls. This prototype was designed in response to the failures of our first prototype. Though the implementation of that prototype was flawed, the idea of bouncing around as jelly elicited numerous positive responses. As a result we made a simple game that gives players the full freedom to bounce around. Though they each share the same objective, they can go about achieving it in different ways: skill shots of knocking balls into pockets, getting last touches on balls that have been hit by other players, or just launching themselves into other players to prevent them from scoring. Several faculty particularly enjoyed bouncing into and knocking each other around. The feedback from this prototype inspired our third prototype.

This is our first design idea. Players each control a portion of the gelatinous creature onscreen in order to generate force that makes it move. Each component of the creature operates like a slingshot, players can pull on their portion, release, and apply a force in the opposite direction of their stretch. They need to coordinate their efforts in order to make the creature move in the net direction they desire. The prototype includes 3 demo levels with collectible items, as well as blocks that need to be smashed into before reaching the level end. This design idea was an experiment to see if players could coordinate their collective movement by applying forces to their in-game avatar, essentially if they could work together to control one body, and have fun doing it. Unfortunately, this design did not prove successful. Faculty players found the controls unintuitive and movement stilted, as well as lacking a clear objective and a compelling reason to engage with the game at all. This was due in part to an incomplete control interface; however, the design implementation was fundamentally flawed in that it didn’t allow players enough control over what they were supposed to be doing. The amount of force generated by one player slingshotting barely moved the body, and even then it didn’t usually behave in the manner they intended. We discarded this idea after receiving feedback during our quarter milestone presentation.

We’ve come up with a movement mechanic for the cooperative gameplay we are aiming for. We are now building prototypes to test the mechanic, as well as different applications of it. Players will move by stretching and releasing different parts of their in-game avatar in order to produce a net force that propels it in their target direction.

The first prototype will allow us to test the movement system when applied to goal of getting from point A to a choice of either point B or point C. The second prototype will allow us to test the movement system when applied to the goal of pushing an external object from point A to a choice of either point B or C (similar to the concept of pool or billiards). In order to create a game-within-a-game, we have been focusing on mechanics that involve cooperative multiplayer interactions, i.e., players have to work together in order to perform the tasks that the game demands of them. Some ideas include players controlling parts of a the same in-game avatar, working together to construct and deploy items, and working together to defeat in-game opponents. We’ve also come up with design ideas where teams of players must work together to defeat each other, such as the Cops and Robbers idea below.