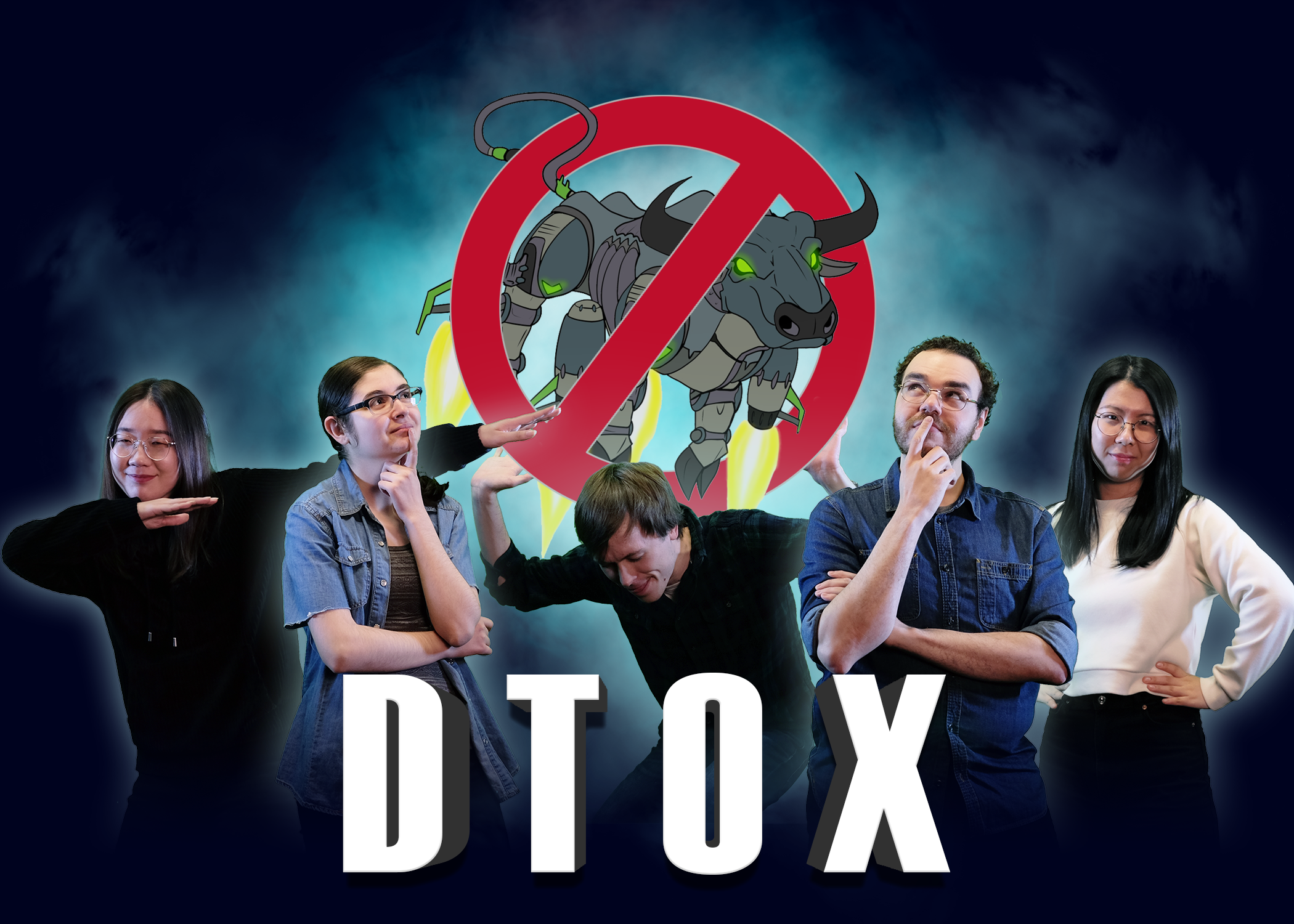 Before we really get into it, let’s highlight that we took and edited our team photo this week. As you can see, we are all about the reduction in cyber-bull attacks.

Now for the meat and potatoes.

We made a paper prototype to try to crystallize our learnings and exploratory goals into a game. We injected these specific ideas into the prototype:

The prototype is a 5-6 player cooperative game about managing a fictional game community. The players take the roll of game developers / community managers and  roll dice to determine how their community behaves. Community members, represented by the dice, have varying probabilities to engage in toxic behavior. When something toxic does inevitably happen, it is up to the players to decide how to react. They are given a description of the event from a randomized deck to help them discuss and decide. The actions they can take are banning the offender, reforming a member of the community, or training a member to be an ambassador for positive social norms. While these choices may appear to be evenly balanced at first, a dominant strategy will be built in such that training players as ambassadors is the best way to win.

The ETC’s Quarter’s Presentations were this week. Quarter’s is an opportunity for the team to focus our work thus far and try to get feedback on the direction we are heading from the faculty.

Our notes from Quarter’s have been compiled and reviewed for consistent messages or particularly insightful comments. Some of the biggest takeaways for us were these:

We had ETC’s Sitdowns later in the week, in which interested faculty can give us extra feedback if they have it. Important notes we got from that were these:

We met with Katie Salen to discuss our ideas and our prototype. Some prime examples of advice she gave to us are as follows:

We met with Jeffrey Lin to get some specific answers about barriers that prevent people from understanding what our game is attempting to teach, as well as his thoughts on where the industry is headed in terms of toxicity. When asked what barriers existed that prevent people from already knowing that punitive tactics should not be the end-all, be-all answer for toxicity, he gave these:

When asked for his thoughts on the direction of the industry for dealing with these things, he answered that many organizations are looking into empathy techniques more these days. That is, looking for some way to show the offenders that they aren’t just harassing a faceless nobody and their toxicity is having a real effect. He gave us a few things to look into, such as Project Horseshoe’s work on social systems and communities around games.

We made the final version of the poster. It was edited to more closely resemble the monitor of a computer that was being used. The same design will be used for the half-sheet.